Hi friends! Alex Segura here. I'm so excited to be sending this first The Awakened email your way, on the launch of Zestworld beta.

What is Zestworld? Well, that's above my pay grade. But from a creator perspective, it's a place giving us opportunities to create stories outside of the traditional channels - without the expectation that we would give up any rights. That's pretty cool.

What it means for you? You get a peek behind the curtain along the way - you'll see The Awakened come together from soup to nuts, from plot to script to pencils to inks, colors, and beyond. It's a transparent and interactive creative process that I think really changes the game for comics. So, welcome to your front row seat.

That's the big picture stuff, but let's talk about what you came to see - The Awakened. What is it? Who's working on it? How does it all fit together? I'll endeavor to give you some answers.

The Awakened is, in the shorthand co-writer/co-creator Michael Moreci and I have crafted, a superhero noir, in the vein of comics like DC's The Golden Age, Marvel's Supreme Power, and indie superhero universes like Black Hammer, Astro City and more. It's a deep-dive into the meaning of power through recognizable but very human superhero archetypes, and we hope it asks some big questions about what it means to be powerful and the choices people make to attain power. Heady stuff, huh? But that's not all - the book is loaded with action, character conflict, and a diverse and unique cast of characters that reflect the world we live in.

The Awakened is an idea that started years ago, when Mike and I were toying with an idea for a superhero universe - we were looking to do it as an audio drama. We loved the pitch we came up with, but for a variety of reasons, it didn't line up. But the broad strokes of the concept - about a group of conflicted, imperfect people gifted with great powers - and the various paths they chose to use said powers - stuck with us. Over time, we started pecking away at our own version of the concept. We joined forces with our friend Chantelle Aimée Osman, who is serving as a creative consultant on the series (and writing something, too!), and fleshed out the pitch, still unsure of what it might be - another audio drama, prose anthology, or something else?

But I kept getting pulled back to comics, and I knew we could really make this story, now titled The Awakened, sing even in a crowded market. These were superheroes, yes, but it wasn't overly nostalgic and also avoided some of the extreme/grimdark takes that seemed to dominate for a stretch there. The Awakened is character-driven, novelistic in its approach, and about people and the struggles they face when unexpectedly empowered. In short, it's everything we wanted a superhero comic to be, with characters we felt were iconic but not just covers of classic tunes.

We just needed someone to draw the damn thing.

Dean's a great artist with the perfect blend of superhero dynamism and a stark, noir style - when Mike, Chantelle, and I saw his art, it was a no-brainer. And, thankfully, the pitch resonated with him.

Once Dean was in place, we fleshed out the rest of the team, which includes colorist Jason Wordie, letterer Jim Campbell, and editor Brian Cunningham - all pros Mike and I know well, who are as into this idea as we are.

That's a nice chunk of info for now - but I can't leave you without a tease, right? How about a look at Dean and Jason's amazing promo image, which hints at a big, key moment in the first issue of the book. 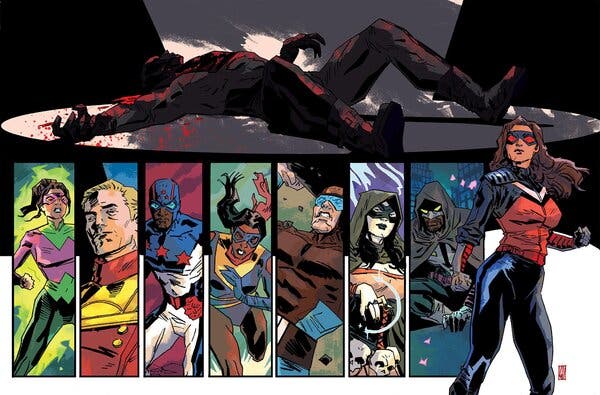 That's all for now. But we'll have some more cool in-progress updates soon from me, Mike, Dean, Chantelle, and the entire team. Stay tuned, as they say!